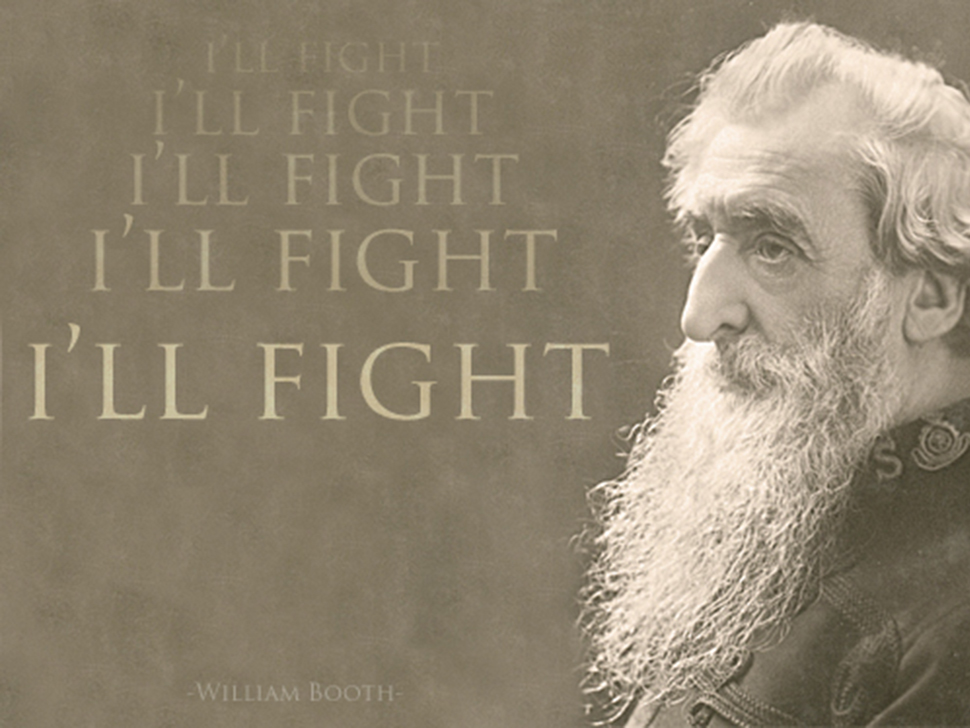 When I think of fighting, I can’t help but recall childhood memories of mom’s voice scolding my brother and me, “Don’t fight!”

We’d fight over silly things. He got the bigger piece of cake. I was on the computer too long. He wouldn’t stop whistling. I wouldn’t stop singing. Like most siblings, we were good at annoying each other (and still are). We may have been good at fighting, but we hated the resulting timeouts and groundings.

When Salvation Army Founder William Booth said he’ll fight, he was not talking about childish tantrums filled with selfish desires. Booth wasn’t talking about fighting with others, but for others. Booth saw brokenness, and he wanted to do something about it when he said:

Instead of fighting for what’s truly important, we often ground ourselves. The time outs I once hated, I now place myself in for fear of getting involved.

We sit on the sidelines. We become comfortable and complacent, even apathetic. Maybe we don’t see the women weeping or the children going hungry. We don’t see the men in prison and the poor on the streets. Sometimes, we choose not to see. We turn our heads. We avert our eyes.

Yet God calls for us to look, to see, and to care. God calls us to fight.

On days when the work day feels long or the goal too far away, I look up to William Booth’s words. That, right there,

Whoever you are and wherever you find yourself today, I hope you fight the desire to grow complacent with the desire to do good, because we have something big to fight for.

If you need a reminder of this simply yet profound idea, feel free to download this 11″ x 17″ printable poster for your home or office.

We are Haley and James Earley, a family of two established on October 11, 2014 in our hometown of Rochester, MN and now living in St. Paul, MN. We are dog-lovers, coffee addicts, tree-huggers, balance-seekers, community-livers, and new foster parents. We live in a house of three adults, three dogs, and our sweet foster kiddos. We desire to slow down in this fast-paced world in order to pursue intentional community as we seek after the heart of God. We're just one couple trying to figure out this whole living life thing.